Disney recently launched a fun and engaging pin collecting game at Disney World’s Magic Kingdom. PinQuest is a park-wide scavenger hunt game that visitors to the park can participate in to solve clues and gain new special Disney pins. 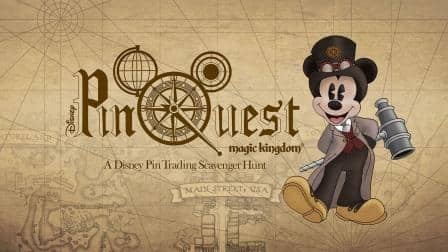 You start by purchasing an adventure kit which includes a special lanyard and pouch to show off your new pins, hold your map and clues and a decoder medal. Starting with your first clue card, you can earn the right to purchase new clue cards as you solve each clue (Disney sure never ceases to find new and creative ways to help us part with our money). After the six clues are solved and redeemed, players can purchase a QuestEAR completer pin from either Frontier Trading Post or Curtain Call Collectibles on Main Street.

The game isn’t cheap. According to the Disney Parks blog, the Adventure Kit retails at $14.99, the clue cards are $9.99 each and the final QuestEAR completer pin goes for $4.99. Essentially, the entire game will cost around $80 per player. Expensive, yes, but a reasonable expenditure for Disney pin fans and a fun new way to explore the Magic Kingdom. It should also be noted that the game components can only be purchased in the park and cannot be purchased online or on the Shop Disney Parks mobile app.

The steampunk-themed artwork for the entire game is pretty awesome as you can see from the design of the QuestEAR completer pin and card: 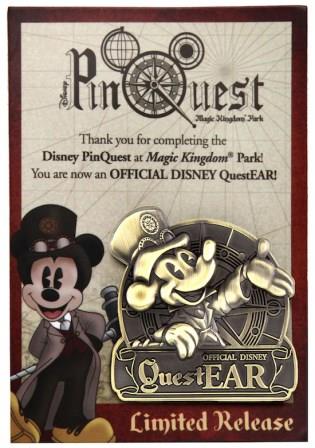 Disney PinQuest began on June 30th. The announcement post for the game calls it a summer game, but gives no end date except to say that it will be available “while supplies last.” Here’s hoping it is still going strong in late September when we visit next!

Have you played PinQuest yet? Leave a comment below and let us know what you think!