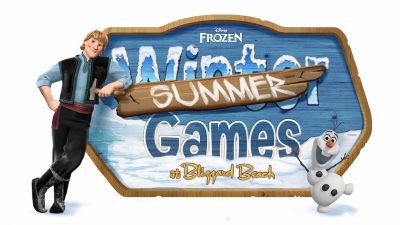 After a successful debut last summer, Disney’s Frozen Summer Games is returning to Walt Disney World’s Blizzard Beach park tomorrow, May 26th. In addition to the fun and festivity introduced last year, this year’s Frozen Summer Games installment also includes meet and greets with the stars of the Games: Olaf and Kristoff.

In case you missed last year’s Frozen Summer Games, here is a quick summary from the Disney Parks Blog:

Following the success of the inaugural “Frozen” Summer Games last year, guests visiting Blizzard Beach can once again join Team Kristoff or Team Olaf to participate in a variety of activities, from Ice Pail Relays and a Snowball Toss to Ski Pole Limbo and Slide Races. It’s going to be a blast!

With crafts, games and a DJ spinning some up-tempo tunes throughout the day, the “Frozen” Summer Games are sure to be a major highlight of your day at Blizzard Beach this summer.