“The Jungle Book: Alive with Magic” has made its debut at Disney’s Animal Kingdom and it looks pretty amazing. Here is a quick peek at the new show:

Disney’s marketing team are masters of the cross-promotion, so it shouldn’t come as too much of a surprise that they are increasing the presence of “The Jungle Book” in their parks this summer. Today, they announced a new show “The Jungle Book: Alive With Magic,” as well as, character meet and greets with Baloo and King Louie. All of this will take place at Disney World’s Disney’s Animal Kingdom.

Baloo and King Louie begin meeting visitors today and can be found at the Upcountry Landing in the park.  “The Jungle Book: Alive With Magic” is scheduled to open Memorial Day along with a number of other new attractions at the Animal Kingdom. 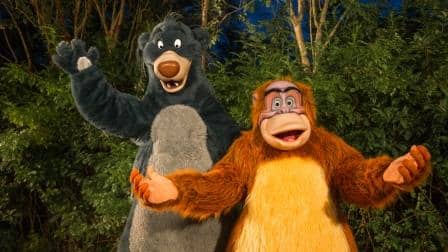