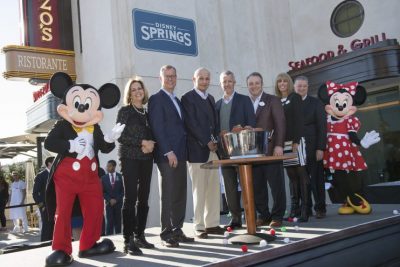 The choices of top-quality restaurants available to Disney Springs visitors continues to grow as Disney officially opened Maria & Enzo’s Ristorante, a high-end Italian restaurant, this week. Here is the rundown of the new restaurant from Walt Disney World News:

The new dining destination brings to Disney Springs the warmth of Italy and the dreamiest Italian cuisine this side of the Atlantic, courtesy of Executive Chef Theo Schoenegger. The restaurant will officially begin serving dinner to the public on January 5. Lunch and brunch service will begin later this month (updated hours and special events available on the restaurant’s Facebook page).

Disney restaurants often have a backstory, part of the company’s tradition of immersive storytelling. Mirroring that tradition, Patina Restaurant Group collaborated with Walt Disney Imagineering to create the story for Maria & Enzo’s.

“The story behind Maria and Enzo is one of travel, food, love and friendship, all steeped in Italian tradition,” said Valenti, referring to the backstory of Maria and Enzo, an Italian couple that immigrated to Central Florida in the 1920s. “Their story is set in a long-forgotten sea-plane air terminal that became the setting for the restaurant.

“We couldn’t be happier to have a chef as talented as Theo Schoenegger,” Valenti continued. “A native Italian with an incredible repertoire, his cooking has a delicious authenticity that brings the story to life.”

Following the dedication, media and special guests enjoyed the food and hospitality at Maria & Enzo’s Ristorante, where Chef Schoenegger presented a variety of signature dishes including, of course, spaghetti in honor of National Spaghetti Day.

The backstory is that the restaurant was the dream of Maria and Enzo who met in Italy before moving to Florida and wanted to introduce Italian cuisine to the townfolk of the bustling Disney Springs. An airline pilot, Enzo was drawn to an abandoned airline terminal, which became the spacious setting for the restaurant.

The backstory tells the tale of Enzo and Maria discovering a long-hidden cavern below the terminal that connected to abandoned sections of the next-door power plant (which today is called The Edison). To Enzo’s astonishment, he came across a Prohibition-era hideaway where a team of flying rum-runners once gathered. Evidence of smuggler activity was everywhere, untouched for decades. Bottles and casks of rum were found along with a roster of flying operatives and their code names. It was a fascinating glimpse at an unknown chapter of the town’s past. Enzo shared his discovery with the local historical society and also decided that the space might make an irresistible spot for dining and socializing. Now it is a cozy gem of a hideaway for Enzo to highlight the family recipes he grew up on, featuring specialties from Rome and nearby regions.

The backstory reveals that Maria began a simple cafe inside the lobby of what was once the bustling Disney Springs air terminal. Pastries and pasta were the initial offerings, but eventually the family was able to install wood-fired pizza ovens that helped make them even more successful. Pizza Ponte is accessed from the entrance beneath the air terminal’s old Control Tower. Within this entrance, guests can view family photos from Maria and Enzo’s many cousins, uncles, aunts and others who began to arrive as their business began to thrive. An elegant wraparound window anchors the space and catches a lot of attention from pedestrians crossing the bridge from the Disney Springs West Side. Offerings reflect many of the most popular foods from both Maria’s roots in Southern Italy and Enzo’s favorites from the region around Rome.