Disney recently announced the launch of a new layer of Marvel marketing aimed at preschoolers. The new Marvel Super Hero Adventures! program softens up the edges on Marvel’s most iconic superheroes for a much younger audience and will span a number of outlets books, toys, comics and apparel. Here are the details of this new program from the Disney Consumer Products and Interactive Media release announcing it: 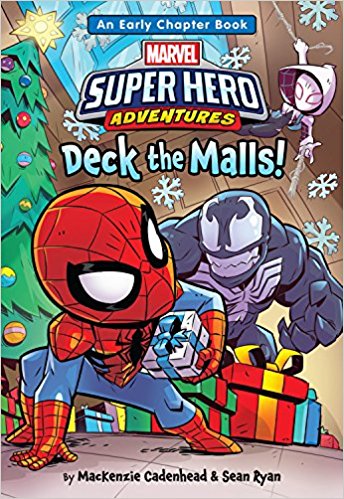 Marvel Entertainment is proud to announce a landmark, multi-platform content program for Marvel’s youngest fans: Marvel Super Hero Adventures! Through both animation and publishing, preschool children and young readers will have a gateway into the Marvel Universe with a robust slate of content. Marvel Super Hero Adventures stories touch on the aspirational themes of friendship, helping others and, of course, heroism. The content will also be supported by exciting new offerings across comic books, graphic novels and merchandise including toys, lifestyle and apparel.

Beginning this Fall, Marvel Animation is set to launch a season of 10 short-form episodes across multiple platforms. This is Marvel’s first pre-school audience focused production, with each 3.5-minute animated episode featuring Spider-Man in an epic team-up with other Marvel heroes. Classic iconic heroes like Iron Man, Thor, Hulk, Captain America and Ant-Man, as well as emerging favorites like Black Panther, Captain Marvel, Wasp and Ms. Marvel will make appearances in the episodes. Platforms and launch date for this short-form series will be announced at a later date.

“Marvel storytelling and characters engage parents and fans around the world, and now preschoolers have the chance to experience the fun and excitement of the Marvel Universe,” said Paul Gitter, Senior Vice President, Marvel Licensing.  “Marvel is a brand for fans of all ages, but particularly by preschoolers and trusted with preschool parents.  Since our characters are inspiring, heroic, responsible, and brave, the new products are the perfect way for preschoolers to celebrate their passion for Marvel in their daily lives.”

Additionally, debuting in September, is a series of early-reader chapter books joining the existing line of popular Marvel Super Hero Adventures activity books and storybooks. The first chapter book, “Deck the Malls!” from Marvel Press, written by MacKenzie Cadenhead and Sean Ryan, illustrated by Derek Laufman, features Spider-Man and Spider-Gwen in a fully illustrated adventure with a bonus one-page comic. Three more chapter books and an expanding publishing program will continue through 2018 and beyond. The Super Hero Adventures merchandising program is led by a core toy collaboration with Hasbro.

“We are delighted to bring Marvel Super Hero Adventures to life across multiple divisions of Marvel Entertainment,” said Dan Buckley, President, Marvel Entertainment.  “The program and content that the teams have developed is smart, inspiring and will reach a whole new generation of Marvel fans.”

The Marvel Super Heroes Adventure content program launches in synergy with an expanded line of cross-category merchandise at retail this Fall. With enhanced marketing support and retail presence this year, the retail statement will expand even more in Spring ’18.