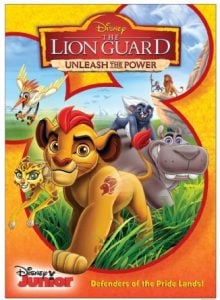 “The Lion Guard” (my son’s favorite Disney show right now) premiered on January 15th and is one of Disney Junior’s most popular shows. For those of you that are not aware of “The Lion Guard,” here is a brief synopsis of the show from Disney:

“The Lion Guard” continues the epic storytelling of Disney’s “The Lion King” and follows the adventures of Kion, the second-born cub of Simba and Nala, and his diverse group of friends as they unite to protect the Pride Lands. They are: Bunga, a fearless honey badger; Fuli, a confident cheetah; Beshte, a happy-go-lucky hippo; and Ono, an intellectual egret. Together, Kion and his friends make up the Pride Lands’ fiercest, bravest, fastest, strongest and keenest of sight.

I’ll be posting more info about “The Lion Guard: Unleash the Power! here as it becomes available.