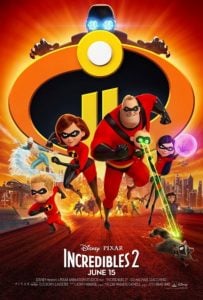 Disney has announced the DVD , Blu-Ray and Digital release dates for their summer blockbuster hit Incredibles 2.  Here is what we know…

Incredibles 2 will be released on Digital (in HD and 4K Ultra HD) and Movies Anywhere October 23rd,  and on Blu-ray, 4k Ultra HD, DVD and On-Demand on November 6th. It can be pre-ordered from Amazon here.

There was no date given yet for Incredibles 2‘s streaming release on Netflix, but it will presumably be on the video-streaming service about 2 months after the Blu-Ray is released, so sometime after the holidays.