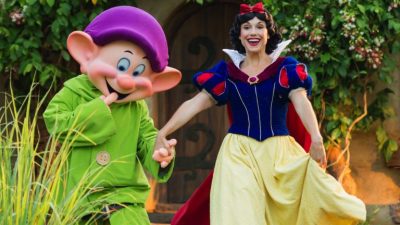 It appears that the recent rumors circulating among the Disney blogging community were true. Disney announced today that there will soon be a Snow White character dining experience at Artist Point in Walt Disney World. Here is what we know so far…

The characters involved in the new experience will be Snow White, Dopey, Grumpy and The Queen. Logistically, this makes a lot more sense for a character meal than the full seven dwarfs that were suggested in the recent rumor.

The experience will be called ‘Storybook Dining’ and it sounds like there will be pretty extensive theming added to the Wilderness Lodge restaurant. According to Disney, it will be transformed into an Enchanted Forest-like setting inspired by Walt Disney’s “Snow White and the Seven Dwarfs.”

The meal will be a themed prix fixe menu. The pricing was not released yet, but it should be noted that Artist Point is/was? a Signature Restaurant, so it may end up being a bit pricey.

We also don’t know the exact start date for Storybook Dining, but Disney did say it would begin ‘this winter.’

Update 10/4/18: Reservations for the new Storybook Dining character meet n greet at Artist Point are now open. Disney has also announced that the experience begins on December 16, 2018. It will cost $55 for adults and $33 for children ages 3-9 (plus tax and tip). The meal will consist of an appetizer, entree and dessert along with non-alcoholic fountain beverage. Alcoholic and specialty drinks are an additional charge.