LEGO fans are some of the most creative around and occasionally, I write about some of their latest Disney-related creations like the It’s a Small World concept or the Sleeping Beauty Castle set, the Andy’s Bedroom concept or even the Big Thunder Mountain submission. The set ideas are submitted to an online platform where other fans can vote for their favorites. 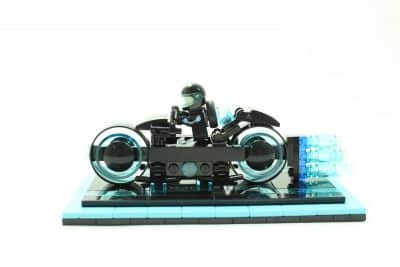 Clearly, it is difficult to garner enough votes for consideration. In the nine years the program has been around, only 21 fan-created sets have been greenlighted including the recently released Women of NASA set. Other notable sets include Back to the Future, Wall-E, Minecraft, Big Bang Theory and Ghostbusters. Now, there is a new, 22nd set to add to this group – The TRON Legacy Light Cycle set.

Here is the official announcement video for the new TRON LEGO set:

Here is a description of the new TRON LEGO set from its creators, BrickBrosUK (source):

The light cycle allows a minifigure to easily fit into and clip onto the handles, the light cycle its self has a console in front of the user, two handle bars and detailing down the sides, there is also a power stream behind connected to the light cycle. The Sam Flynn minifigure comes in a tron suit with helmet and disc connected on the back of the minifigure for added detail. The light cycle can easily be mounted on to the Grid base with two connection points and the base has the Grid effect with black and trans-blue tiles creating a tron feel and has a medium azure trim for finish.

There is no release date set for the TRON Light Cycle LEGO Set, but we can expect it will arrive in stores sometime in 2018.