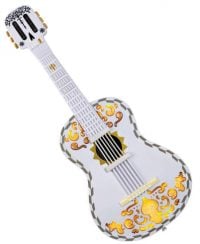 Coco, the new animated film from Disney Pixar, is a celebration of a lifetime, where the discovery of a generations-old mystery leads to a most extraordinary and surprising family reunion. Miguel dreams of becoming a musician, and practice makes perfect! Now you can bring to life the beautiful music straight from the film.

The interactive guitar allows kids to learn the most iconic song from Coco, “Remember Me”, and features strummable “strings”, working lights and true-to-movie details. And the guitar neck is topped by a super cool skull that chomps when you press the first chord button! This guitar also comes with sheet music so you can learn additional songs and become the musician you always dreamed of. A great gift for fans of Disney Pixar’s Coco!

Prove your talent and live out your dreams of becoming a musician with the Disney Pixar Coco Guitar. Resembling the guitar from Coco, the animated film from Disney Pixar, this musical instrument features working lights, strummable “strings,” true-to-film details and a super cool skull on the headstock that chomps when you press the first chord button. Learn “Remember Me,” the most iconic song from Coco, along with other songs using the included sheet music, and become the star you were always meant to be.