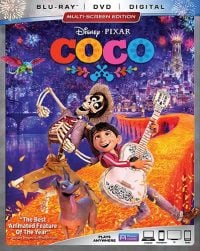 In Coco, Disney•Pixar’s vibrant tale of family, fun and adventure, an aspiring young musician named Miguel (voice of newcomer Anthony Gonzalez) embarks on an extraordinary journey to the magical land of his ancestors. There, the charming trickster Héctor (voice of Gael García Bernal) becomes an unexpected friend who helps Miguel uncover the mysteries behind his family’s stories and traditions. (source)