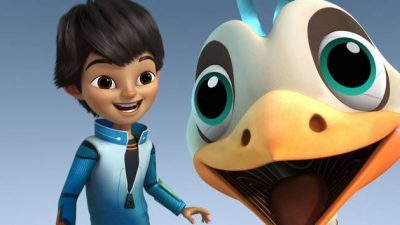 This intergalactic adventure charts the outer space missions of young adventurer Miles Callisto and his family – mom and ship captain, Phoebe; mechanical engineer dad, Leo; tech-savvy big sister, Loretta; and robo-ostrich pet, Merc – as they help connect the universe on behalf of the Tomorrowland Transit Authority. Each episode features two 11-minute action-packed stories as Miles, Merc and the Callisto family explore wondrous and diverse new worlds, taking young viewers and their families on a futuristic journey that fuels kids’ natural interest in space, and at the same time reminding them of the importance of what lies close to home – the family bond. (source)