Here is everything you need to know about the amazing Disney series Muppet Babies  including casting, episodes, fun facts and more. I hope you find this listing informative and helpful! 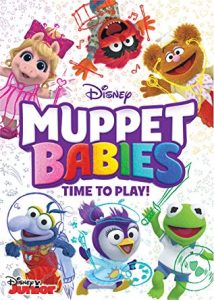 Almost 30 years after the Muppet Babies first won the hearts of kids and families around the world, Disney Junior’s reimagined television series chronicles the hilarious playroom antics of a young Kermit the Frog, Piggy, Fozzie Bear, Gonzo and Animal – plus a brand new Muppet Baby, Summer Penguin. Under the watchful eye of Miss Nanny, the Muppet Babies use their imaginations to embark on countless adventures that take them to the farthest corners of the universe.

Based on the original Emmy® Award-winning series, the all-new CG-animated “Muppet Babies” is geared towards kids 2-7 and their families, with each episode featuring two 11-minute stories. While spotlighting the zany comedy that the Muppet Babies are known for, each story is also designed to introduce young viewers to the unique problem-solving power of imagination. Whether it’s Kermit helping a dragon get over her fear of the dark or the Muppet Babies learning the importance of fair play during a rainy day board game, the series imparts lessons along the way that are relatable to kids and their families.

Just like young viewers at home, each Muppet in the playroom has a unique personality and perspective that contributes to their friendly dynamic. Kermit is the leader and the voice of reason for the group; Piggy is the super fabulous tough-as-nails adventurer; Fozzie is the big-hearted comedian; Gonzo is the stunt-crazed daredevil; and Animal is the wild one who marches to the beat of his own drum. Rounding out the ensemble is the new Muppet Baby, Summer, an artistic and creative penguin who loves to paint, draw, sing and dance.

With the addition of Summer, the group adds another strong female character to the playroom who serves as a perfect foil to her new BFF, Piggy. Though Summer is the smallest of the Muppet Babies, she’s got a big heart and is always there to share good times with her new friends or listen when they’re feeling down. Originally hailing from Antarctica, her life and experiences differ from the other Muppet Babies, which offers the series a chance to explore how young kids build relationships with new friends from different places and backgrounds.

Set in the vibrant playroom of an urban brownstone with an expansive backyard, the Muppet Babies have everything they need at their fingertips to lead them on their fantastical adventures. The backyard alone is home to Kermit’s bouncy “pond,” Piggy’s dressing room, Summer’s art table, Gonzo’s chicken coop, Fozzie’s stage and a communal treehouse. In every episode, through a rainbow transition, the Muppet Babies use their imaginations to transport them into a fantasy sequence, each with a distinct style ranging from collage, comic book and classic cartoons to live-action footage.

Music also plays an important role in the series, with almost every episode featuring original songs ranging in different musical styles from 70s disco to contemporary. The series’ iconic theme song has also been reimagined for a new generation by the acclaimed songwriting team of Kay Hanley, Michelle Lewis and Dan Petty (“Doc McStuffins”) and is performed by Tony Award®-winner Renée Elise Goldsberry (Broadway’s “Hamilton”). (source)