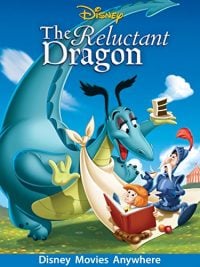 While on his way to present a movie idea to Walt Disney, our tour guide discovers how a cartoon is created through art, sound, and color. Along the way, he meets Donald, Pluto, Goofy, and other Disney favorites. He also witnesses the birth of “Baby Weems,” a brilliantly funny animated work-in-progress, and invites us to enjoy an animated short he originally pitched to Walt, titled “The Reluctant Dragon.”