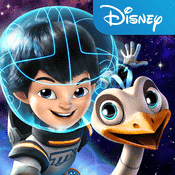 With Miles From Tomorrowland: Missions, get ready to take your space adventure to the next level as you outrun tidal waves and escape the Flickorax with Miles Callisto and his robo-ostritch best friend, Merc, from the new Disney Junior series, ‘Miles from Tomorrowland!’ Journey with Miles on rescue missions, and use cool tools and tricks to dodge asteroids, collect rare space rocks, and turbo boost your way through this blastastic deep-space race!