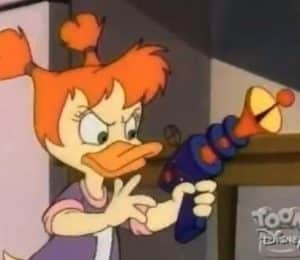 Who is Gosalyn Mallard?

Gosalyn Mallard was a character in the Disney animated series Darkwing Duck. She was originally voiced by actress Christine Cavanaugh who was best known as the voice of Chuckie Finster in the 1990’s Nickelodeon series Rugrats.

Here is the Internet’s largest collection of Gosalyn Mallard -related movies, TV shows, toys and other products. As always, new pieces are added to this collection regularly.

Last updated on: 05/10/21Darkwing Duck Description: Darkwing Duck was a popular Disney Afternoon children’s show that ran from 1991-1992. It was a spinoff of its…