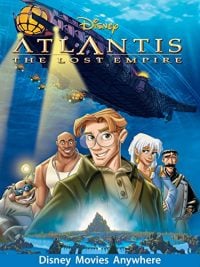 In Disney’s animated film Atlantis: The Lost Empire, the world’s most highly qualified crew of archaeologists and explorers are led by historian Milo Thatch as they board the incredible 1,000-foot submarine Ulysses and head deep into the mysteries of the sea. The underwater expedition takes an unexpected turn when the team’s mission must switch from exploring Atlantis to protecting it. Filled with stunning visual effects, Atlantis: The Lost Empire is a captivating story loaded with laughs and messages of friendship and teamwork.