Disney Magic Kingdoms Mobile Game | Everything You Need to Know 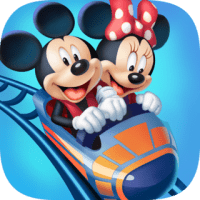 What is Disney Magic Kingdoms?

When Maleficent casts an evil spell on the Kingdom, ridding it of all of its powerful magic, can you help bring it all back? Relive the thrill of Disney Parks and create the most fantastical Park of your dreams in Disney Magic Kingdoms!

PLAY A RIVETING TALE OF HEROES AND VILLAINS

Come and join us in the most magical free game on mobile! It’s your world for the making!