Here is everything you need to know about the amazing Great Moments with Mr. Lincoln attraction at Disneyland including history, reviews, fun facts, photos and more. I hope you find this listing informative and helpful! 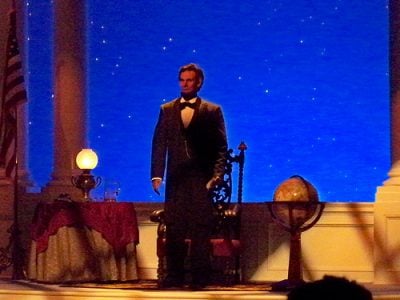 At Great Moments with Mr. Lincoln, revel in the recitations of President Abraham Lincoln that changed history and helped shaped a nation. Through the latest Audio-Animatronics technology, the Great Emancipator returns to tell the tale of generations past and share his inspiring—and still very relevant—vision of the future.

A New Nation, Conceived in Liberty
Make your way into an intimate theater, passing through a large room of models, artwork and artifacts showcasing the life and times of Abraham Lincoln. The show begins with a screening of a film composed of dramatic paintings depicting President Lincoln’s life from his humble rural upbringing to the White House. You’ll be moved by real photographs of the Civil War, accompanied by the touching ballad “Two Brothers.” Then, be awed as Honest Abe takes center stage and delivers highlights from some of his greatest speeches.

Next-generation Audio-Animatronics technology gives the President more emotion and vitality than ever before.
Every detail is presented as realistically as possible; Lincoln’s life mask was the model for the original figure’s face. While no recording of Lincoln’s voice exists, actor Royal Dano provides a stirring interpretation of Lincoln’s immortal words.

A Historic Presentation
Walt Disney was fascinated with the life of Abraham Lincoln. As a child, he even recited Lincoln’s Gettysburg
Address to his elementary school class. The first Audio-Animatronics version of Lincoln debuted in 1964 at the New York World’s Fair. The show was so life-like that National Geographic magazine called the figure “alarming” in its realism. In 1965, the smash hit was relocated to Disneyland Park, where it has been enjoyed in one incarnation or another ever since.