Here is everything you need to know about the amazing Touchstone Pictures movie Dan in Real Life including casting, reviews, fun facts and more. I hope you find this listing informative and helpful! 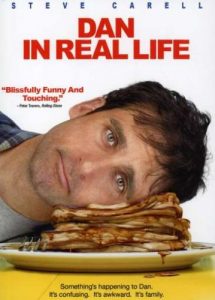 Steve Carell, Hollywood’s leading funnyman, stars in the hilarious comedy that’s bursting with charm — a movie you’ll watch again and again. Advice columnist Dan Burns (Carell) is an expert on relationships, but somehow struggles to succeed as a brother, a son and a single parent to three precocious daughters. Things get even more complicated when Dan finds out that the woman he falls in love with is actually his brother’s new girlfriend. Carell is joined by a brilliant all-star supporting cast, including Juliette Binoche, Dane Cook, John Mahoney and Dianne Wiest, for a heartfelt, fun-filled comedy.