Here is everything you need to know about the amazing Disney movie Dolphin Reef including casting, reviews, fun facts and more. I hope you find this listing informative and helpful! 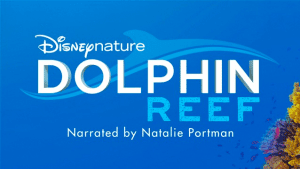 Disney recently announced their latest DisneyNature project, Dolphin Reef, which will be narrated by Natalie Portman and will debut on Disney+, the new streaming service that launches in the US on November 12, 2019. This will presumably replace the Dolphins documentary that was announced previously, but failed to make an appearance on the big screen.

Dolphin Reef will follow a young Pacific bottlenose dolphin named Echo who can’t decide if he’s quite ready to grow up and take on new responsibilities. (Same, Echo. Same.) Even more magical, the film will be narrated by Academy Award-winning actress Natalie Portman. (source)