Here is everything you need to know about the amazing Touchstone Pictures movie Father of the Bride including casting, reviews, fun facts and more. I hope you find this listing informative and helpful!

Father of the Bride Description 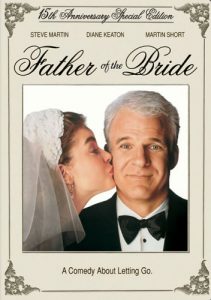 Steve Martin turns in a heartwarming and hilarious performance as George Banks, a befuddled father who has a hard time letting go of his young daughter when she unexpectedly announces her plans to wed. Diane Keaton shines as George’s patient, levelheaded wife, while funnyman Martin Short lights up the screen as the off-the-wall wedding consultant. Father Of The Bride vows to deliver fun for the entire family!

Father of the Bride Details

Father of the Bride Trailer: