Here is everything you need to know about the amazing Disney movie The One and Only Ivan including casting, reviews, fun facts and more. I hope you find this listing informative and helpful!

The One and Only Ivan Description 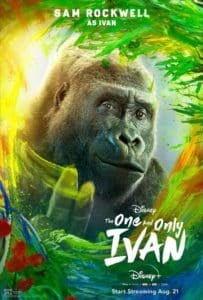 The film, which was previously scheduled to be released theatrically by The Walt Disney Studios, is an unforgettable tale about the beauty of friendship, the power of visualization and the significance of the place one calls home. “The One and Only Ivan,” which comes to the screen in an impressive hybrid of live-action and CGI, is based on Katherine Applegate’s book, which won numerous awards upon its publication in 2013, including the Newbery Medal. (source)

The One and Only Ivan Details

The One and Only Ivan Trailer: