Some may find it hard to believe, but Walt Disney World’s Magic Kingdom Park turns 45 this year. Yes 45!

In addition to their Halloween festivities and getting ready for the Holiday Season, Disney is also celebrating the Magic Kingdom 45th Anniversary in typical Disney style: Special events,  merchandise and other goodies.

Here is a rundown of what has been announced so far for the Magic Kingdom 45th Anniversary celebration. As always, I will be updating and adding to this post as more info is released, so check back soon!

Disney will hold a special anniversary event on Cinderella Forecourt Stage at 9:30am on October 1st. The event will reportedly feature special character and dignitary appearances and music.

Disney has created a boatload of commemorative merchandise to celebrate their 45th. Shirts, handbags, special trading pins, MagicBands, lanyards, etc. The new merchandise will be available at Walt Disney World Resort with some of the items finding their way to the Shop Disney Parks app.

If you are visiting the Magic Kingdom, your best bet to snag some of the new products at the following stores: 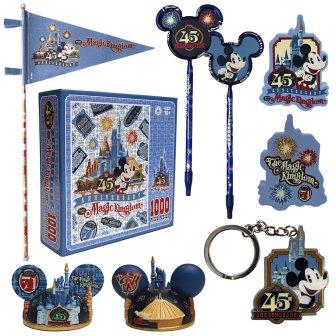 Also, PANDORA Jewelry will be releasing a special commemorative 45th Anniversary dangle charm that can be found at Uptown Jewelers in the Main Street, U.S.A. section of the Magic Kingdom.

Finally, between October 1-9, you will be able to get a commemorative t-shirt from DisneyStore.com/ParkEvents. These limited release t-shirts depict a number of the classic Magic Kingdom attractions like the Jungle Cruise, Haunted Mansion and Hall of Presidents. Have a look: 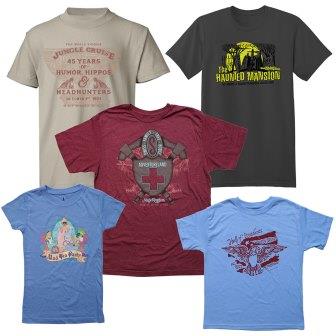