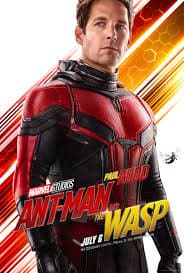 While not expected to be as big a hit as it’s two Marvel predecessors this year, Ant-Man and the Wasp performed quite well at the box office in its opening weekend.

The stand-alone superhero film took in $76 million domestically and $161 million globally at the box office this weekend. This was more than enough to make the film #1 for the weekend.

To put the sequel’s performance in perspective, the original Ant-Man opened to $57.2 million domestically in 2015.

So where will the latest Marvel Cinematic Universe film end up ranking among the other nineteen? Time will tell. Be sure to check back on this post in the future as I will be updating it weekly with new Ant-Man and the Wasp box office totals and news.

Update 7/22/18: After a few weeks, Ant-Man and the Wasp has put up a respectable showing. It currently sits at$165 million domestic and $353.5 million global.

Update 8/26/18: Ant Man has had a bit of a resurgence of late as it recently opened in China and achieved Marvel’s 4th highest debut ever in the country ($68 million). It now sits at $544 million globally ($212 million domestic, $333 million international).