New Years is an amazing time at Walt Disney World. As expected, Disney spares no expense to put on a first class show with a number of premium “extras” available to those that want to make the night just a bit more magical. Here is a rundown of what we currently know will be going on New Years at Disney World. As always, I will be updating this post as more events and options are announced. 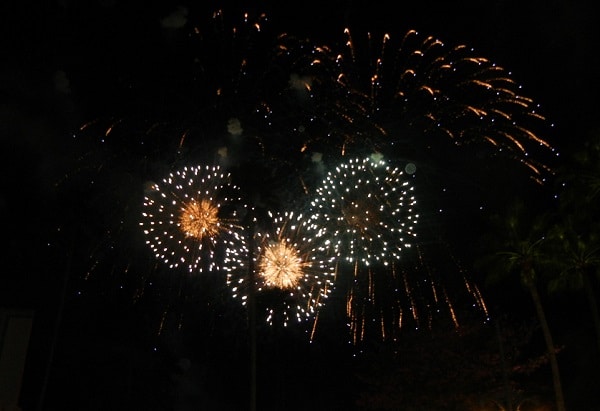 Disney will be running their Fantasy in the Sky Fireworks in the Magic Kingdom on December 30 and December 31. The show begins at 11:50 each night and is a show not to be missed.

As if one fireworks display wasn’t enough, Disney is running a second themed display at the Magic Kingdom on both December 30 and December 31, titled Holiday Wishes. Holiday Wishes begins at 7:30pm.

Epcot is also getting into the fireworks game on New Year’s eve as they hold an unforgettable New Year’s countdown and fireworks display, only on December 31st, beginning at 11:40pm.

Finally, there will be a special presentation of the Star Wars: A Galactic Spectacular fireworks show immediately after a countdown at Disney’s Hollywood Studios.

You can make dining reservations online or by calling (407) 939-3463. Guests under 18 years of age must have parent or guardian permission to call.

Availability is limited. Dining events are subject to change or cancellation without notice. Separate Epcot theme park admission is required for Monsieur Paul.

Magic Kingdom- The place to be at the Magic Kingdom is Frontierland as a DJ will be spinning tunes and guests will be dancing until park close. The tunes begin at 7:30pm on both December 30th and December 31st.

Epcot- Epcot will feature multiple DJs on New Years Eve as the party gets started on both sides of the World Showcase Lagoon. One DJ will be spinning tunes at the Future World Fountain Stage while another sets up shop at the American Garden Stage.

Disney’s Hollywood Studios- Hollywood Studios will also feature a dance party with a DJ spinning tunes at Center Stage from 7pm on New Year’s Eve until the countdown and fireworks show and then continues after the show until 1am.

The Contemporary is going to ring in the New Year in a big way this year. Here are the four major options:

Disney Countdown to Midnight – includes delightful dining, live music, libations and more. An interactive band and DJ will fill the dance floor (and we hear that Mickey and Minnie may make a special appearance). Then welcome in 2018 with a flute of bubbly and a viewing of those legendary New Year’s Eve fireworks in Magic Kingdom Park. Hours are 8 p.m. to 12:15 a.m. in the Fantasia Ballroom. This party is designed for guests 18 and older.

Pixar Party: A New Year’s Eve Celebration – for children of all ages, a family-friendly way to ring in the New Year with a Disney•Pixar-inspired dinner. Sarge welcomes you to the Ballroom of the Americas that features vignettes of beloved Pixar movies. From Andy’s Room in “Toy Story” to and Metro City with The Incredibles, the immersive celebration will include theatrical backdrops, dramatic set pieces and fun props that re-create the fantastic worlds of the Pixar films. And, of course, favorite characters will be on hand from “Toy Story,” “The Incredibles” and “Up.” Kids can have fun at Pixar face painting, a balloon artist and a boot camp with Sarge, while an interactive DJ will spin hits from Radio Disney (he’s going to be in a “Cars”-inspired DJ rig from Radiator Springs). Dinner is buffet style. At midnight, head outdoors to ring in the New Year with a viewing of the Magic Kingdom Park fireworks. Hours are 8 p.m.-12:15 a.m.

Down in New Orleans: A Disney New Year’s Eve Dining Experience –  located in the Grand Republic Ballroom. Inspired by the Disney animated film “The Princess and the Frog,” the room is beautifully decorated French Quarter style to transport you to the Big Easy. Actions stations will feature flavors such as oyster beignets, smoked salmon mousse cones with caviar, Kobe beef tartare and sheep’s milk ricotta gnocchi. Signature dishes will include herb-crusted Louisiana redfish, crayfish etouffee, Black Angus beef cooked two ways, braised short ribs and filet of beef with truffled celery root silk. Toward the end of the evening an amazing vocalist, reminiscent of Tiana, joins the band to bring the Academy Award winning classics of the legendary composer, Randy Newman, to life. Then slip outside with a glass of bubbly just before midnight to ring in 2018 with a private viewing area for the Magic Kingdom Park fireworks. Hours are 7 p.m.-12:15 a.m.

California Grill New Year’s Eve Hollywood Hideaway – Swing in the New Year with “stars and starlets” high in the sky at this cool and classy California Grill get-together. Schmooze the last hours of 2017 away at this “Rat Pack” inspired shindig where favorite Disney characters make a guest appearance and the evening caps off with spectacular views of Magic Kingdom fireworks.

For reservations for any of these four Contemporary Resort events, call 407-WDW-DINE.

Join Mickey, Minnie and friends for a family-friendly barbecue at Disney’s Fort Wilderness Resort as they celebrate the new year at Mickey’s New Year’s Eve BBQ. During this special finger-licking, foot-stomping barbeque event, you’ll feast on mouth-watering items such as Bacon Jam Burger Sliders grilled on site, Wagon Wheel Mac’n’Cheese for the kiddos, and Mini S’mores served in Mason Jars!

In addition to this all-you-care-to-enjoy BBQ spread, you’ll get to enjoy the sounds of a live bluegrass band and a DJ. After dinner, cowpokes can mosey on over to the dance floor for line dancing led by Disney Friends! Then get ready to count down to midnight and watch the world-famous Magic Kingdom fireworks from a special viewing area.

Make your reservations now for the hoedown of the year!

Be the first to comment on "Celebrating New Years at Disney World: What To Do?"