At Disney News, we are constantly in search of new and interesting Disney-related products to share with you in the DINUS Mall.

Be sure to check back often as we are adding new products to the Mall daily! 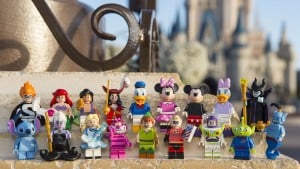 Enthusiasts of 1950s Disney stories will appreciate the inclusion of Alice and the Cheshire Cat from Alice in Wonderland, Peter Pan and Captain Hook from Peter Pan, and the evil witch Maleficent from Sleeping Beauty.

Disney fans will also love minifigure versions of Ariel and Ursula from The Little Mermaid and the beloved Genie and Aladdin from the fictional city of Agrabah featured in Aladdin, plus the ultimate alien friend, Stitch, from Lilo & Stitch.