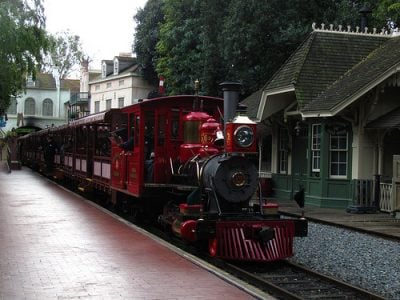 Embark on a relaxing 18-minute, just over a mile long, scenic tour aboard an authentic steam-powered train.

Discover New Breathtaking Views
Along the Banks of the Rivers of America, see landscapes inspired by 4 of America’s majestic rivers: the Mississippi, the Columbia, the Missouri and the Rio Grande. Each are carefully recreated, complete with indigenous rock formations, natural forests and wildlife and 5 picturesque waterfalls.

A Turn for the Best
The train will now traverse across several trestles elevated above the river and make a left-hand turn to continue around the park. This is the very first time the Disneyland Railroad is circling to the left around the park! It will be like you are experiencing the ride for the first time.

Behold Restored Sites
Included in the tour are Walt Disney’s legendary dioramas of the Grand Canyon and Primeval World. They’ve been carefully restored to their original splendor, with a bit of new magic added to both!

The Disneyland Railroad is also a handy way to get around quickly and easily. And because the trains are scheduled to arrive every 5 to 10 minutes at most times throughout the day, you’ll have just enough time to take in all the sights around each station!

Blast from the Past
There are 5 meticulously restored, working narrow-gauge trains you can ride. Each includes 4 sets of passenger cars and has been named after a careful selection of locomotive legends. The lone exception is the Ward Kimball, named after the Disney Animator who fostered Walt Disney’s passion for the railway.