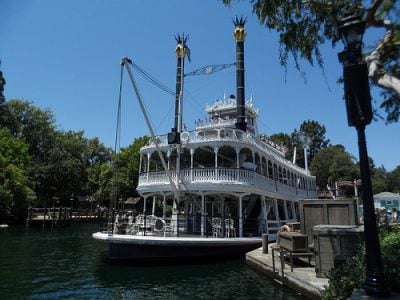 Cast off on a scenic half-mile adventure into the wilds of old America aboard a steam-powered paddler. Board the 19th-century-inspired Mark Twain riverboat nestled in the heart of Frontierland and embark on a relaxing sightseeing voyage around Pirate’s Lair on Tom Sawyer Island.

Sights to See
During this charming, 14-minute journey into America’s early frontier, sharp-eyed explorers can observe a menagerie of sights along the river’s edge, including:

Along the way, listen to lively narration about a time when traveling was as much about new discoveries as it was about transportation.