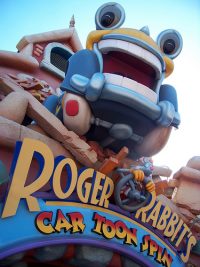 The Weasels have captured Jessica Rabbit and are in hot pursuit of Roger Rabbit, armed with a deadly concoction of Toon-toxic Dip!

Step inside the Toontown Cab Co. and wind your way through a shadowy back alley. Pass Baby Herman’s apartment and the backstage area of the famed Ink & Paint Club, where an evil plan to wipe out the animated population of Toontown is being hatched.

Hop aboard a “toon” taxicab and stay on the trail of Roger Rabbit and Benny the Cab as they race through town in search of Jessica Rabbit while avoiding the villainous Weasels, who are pouring Toon-melting Dip in the paths of passing vehicles—including yours!

A Wild Ride That You Control
As you drive through downtown Toontown, be on the lookout for the dreaded glowing Dip, which could send your cartoon ride into a turbulent tailspin. Steer your vehicle a full 360 degrees as you manage to gain control and pilot to safety along the crazy course.

Crash and dash through Bullina’s China Shop and slip and slide through the Power House. Be blown out of this world in true cartoon fashion before spinning recklessly into the Gag Warehouse storage area, where the wily Weasels are waiting and the dreaded Dipmobile is taking aim at your cab.

Is this the end of the line for you and Roger Rabbit? Don’t count on it!