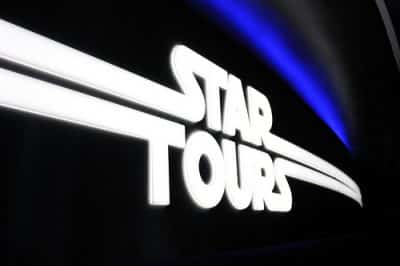 In Star Tours – The Adventures Continue, blast off on a thrilling tour of the Star Wars galaxy aboard a Starspeeder 1000. Come face-to-face with Kylo Ren, Poe Dameron, BB-8 and other characters as you voyage to amazing alien worlds like Jakku and Crait—an all-new planet from Star Wars: The Last Jedi.

Inside the bustling Star Tours spaceport, amid a throng of projection screens and glowing scanners, you’ll quickly come upon R2-D2 and C-3PO as they tinker away on a Starspeeder 1000—a.k.a. your cosmic transportation vehicle.

Then, after you’ve woven past customs, through baggage screening and beyond a series of blinking droids, pick up a pair of 3D flight glasses and continue to your departure gate, where overhead monitors provide further boarding instructions.

As you prepare for lift-off, a series of mishaps unwittingly causes your starship to launch—and C-3PO to take control! Suddenly, your space cruiser is intercepted by First Order forces. Fearing capture, C-3PO pilots your ship on an unpredictable flight that will rocket you to the farthest reaches of the galaxy!