Here is everything you need to know about the amazing Disney movie Swiss Family Robinson  including casting, reviews, fun facts and more. I hope you find this listing informative and helpful! 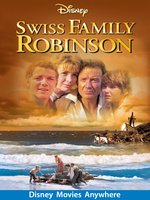 Swiss Family Robinson chronicles the courageous exploits of the Robinson family after they are shipwrecked on a deserted island. Using teamwork and ingenuity, they skillfully overcome the obstacles of nature and transform their new home into a “civilized” community. But the ultimate challenge lies ahead when a band of cutthroat pirates threaten to destroy the Robinson’s Makeshift paradise.