Here is everything you need to know about the amazing Disney series One Day at Disney including casting, episodes, fun facts and more. I hope you find this listing informative and helpful!

One Day at Disney Description 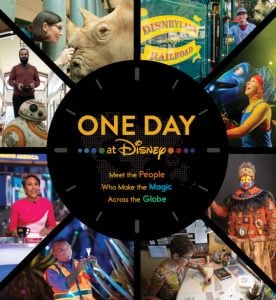 The new, 52-episode short-form series One Day at Disney will debut on Disney+ on December 3, the same day the book arrives in stores. A feature-length documentary will serve as the kickoff to the exciting new series, which takes an in-depth look at the unique and surprising roles these men and women call their daily jobs. Here are the talented individuals who will be profiled in the Disney+ docu-special (in alphabetical order):

More than 50 One Day at Disney Shorts will follow the debut of the special, each profiling a single remarkable person and their fascinating job. A new short will debut each week.

One Day at Disney Details

One Day at Disney Trailer: