As Disney is in the process of taping their various holiday shows in the parks (sorry to spoil it, but they aren’t live and are actually being taped now), more details have emerged about what Disney Parks holiday specials will be aired on TV this season and where you can find them on your dial. 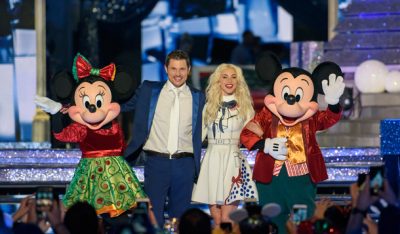 Disney will be spreading their holiday specials across a number of their television properties (Disney Channel, ABC affiliates and Freeform) this year. Here is a detailed explanation of what will be airing where from today’s Disney Parks Blog announcement:

Raven-Symoné and Issac Ryan Brown from the hit Disney Channel series “Raven’s Home” kick off the “Disney Parks Presents a Disney Channel Holiday Celebration,” in the DisneyNOW app beginning on Friday, November 24. Viewers who sign in to the app with a pay TV subscription will be the first to experience the show before it officially premieres on Disney Channel on Friday, December 1, 8-9:30 p.m. ET.

…and check this out! Booboo Stewart from “Descendants 2” will take viewers on an exclusive tour of Toy Story Land, opening next summer at Disney’s Hollywood Studios at Walt Disney World Resort.

“The Wonderful World of Disney: Magical Holiday Celebration”premieres Thursday, November 30, 9–11p.m. ET on The ABC Television Network and on the ABC app. Follow Julianne Hough and Nick Lachey as they host the exciting two-hour event from the Walt Disney World Resort and Disneyland Resort. They join co-host Jesse Palmer to kick off the holiday season in a way only Disney can – showcasing incredible music performances by Ciara, Darius Rucker, Fifth Harmony, Fitz and the Tantrums, Hanson, In Real Life, Jason Derulo, Lea Michele and more.

Tune in on Christmas morning for the “Disney Parks Magical Christmas Celebration” (check local listings), which will include your favorite Disney characters and performances by Ciara, Darius Rucker, Fifth Harmony, Fitz and the Tantrums, Jason Derulo, Lea Michele, 98°, Telly Leung and Arielle Jacobs from Broadway’s Aladdin and more.

Go behind-the-scenes of some of the most spectacular weddings and engagements from a Frozen-inspired wedding at Walt Disney World Resort to a surprise engagement at Aulani, a Disney Resort & Spa in Hawaii, during “Disney’s Fairy Tale Weddings: Holiday Magic,” a one-hour, holiday-themed special premiering on December 11, 8p.m. ET.

Then, get an inside look at how Disney Parks and resort hotels across the globe transform into a winter wonderland for the holiday season with “Decorating Disney: Holiday Magic,”premiering December 18, 8 p.m. ET.