Here is everything you need to know about Walt Disney World’s Magic Kingdom’s Big Thunder Mountain Railroad Ride ride including history, fun facts, photos and more. I hope you find this listing informative and helpful! 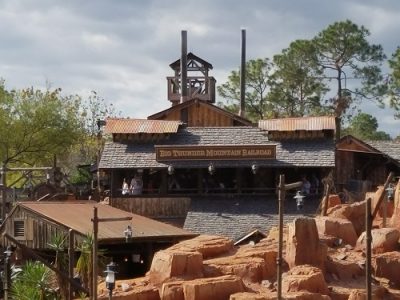 On Disney World’s Big Thunder Mountain Railroad Ride, Race through a haunted gold-mining town aboard a rollicking runaway mine train.

The Wildest Ride in the Wilderness

Dash in and out of desert caverns and rumble through a haunted mine aboard a speeding train.

Amid rugged bedrock and desert cactus, venture inside a nearly 200-foot mountain to the Big Thunder Mining Company, established in the early days of America’s Gold Rush. Traipse down into an abandoned mine shaft and discover a mysterious 5-car locomotive waiting to take you on a journey inside an abandoned shaft.

Hang Onto Your Hats!
As you begin your journey into the darkness of the tunnel, the train’s wheels chug back and forth across a rickety track. Swoop around turns and dip and drop into canyons and caves, darting through the ghost town of Tumbleweed.

Peel under a booming waterfall, past rock formations, and dodge a rumbling boulder from an inexplicable landslide. Along your adventure, glimpse the remnants of a flash flood and behold a bevy of local critters—including bats, opossum and a goat—before hastily making your way back to the safety of the railroad station.

Barnabas T. Bullion is the founder and president of the Big Thunder Mining Company. The longtime mining magnate comes from a powerful East Coast family and considers gold to be his very birthright by virtue of his oddly appropriate name; in fact, he considers the ultimate gold strike to be his destiny. And that is why he is having so much trouble with Big Thunder Mountain. According to superstitious locals, Big Thunder Mountain is very protective of the gold it holds within, and the unfortunate soul who attempts to mine its riches is destined to fail. And so far that prophecy is coming to pass. The mine has been plagued by mysterious forces and natural disasters ever since. And yet the Big Thunder Mining Co. is still in operation. In fact, Bullion is discovering new veins of gold and digging new shafts every day, offering a closer look at the Big Thunder mining operation than ever before. But a word to the wise for anyone attempting to visit the mountain: watch out for runaway trains. (source)