Here is everything you need to know about Walt Disney World’s Hollywood Studios’ Indiana Jones Epic Stunt Spectacular! show including history, fun facts, photos and more. I hope you find this listing informative and helpful! 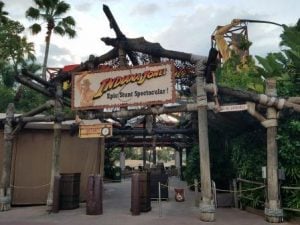 Against the backdrop of temple ruins, Indiana Jones makes a grand entrance and the show swings into non-stop action. In pursuit of the golden idol, Indy and his companion Marion battle dangerous bad guys, leap from tall buildings and make other daring escapes as fake bullets fly and a moving vehicle bursts into flames. The edge-of-your-seat suspense comes to a climax in an explosive finale!

As the 2 heroes triumph over traps, villains and epic obstacles, a director explains the movie magic. Learn the difference between stunt doubles and stunt actors. And watch demonstrations of basic fight routines—how to safely throw and take punches, fall from tall buildings, and even wield whips in the midst of complex action sequences.