Here is everything you need to know about Walt Disney World’s Magic Kingdom’s The Hall of Presidents show including history, fun facts, photos and more. I hope you find this listing informative and helpful!

The Hall of Presidents Description 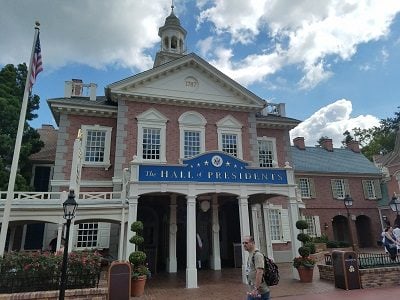 Discover the unique relationship between the President and the American people during this rousing presentation.

Enter the pristine Hall of Presidents in the heart of Liberty Square—modeled after Independence Hall in Philadelphia—and make your way beneath an awe-inspiring grand rotunda. Peruse an authentic artifact collection nearby featuring such treasures as George Washington’s dental instruments and Abraham Lincoln’s leather portfolio.

The Presidents Will See You Now
Stroll into the 700-seat main theater, home to 3 massive projection screens and a grand proscenium. As the lights dim, sit back and enjoy an original film—developed by a Pulitzer Prize-winning historian—relaying the dramatic story of the United States of America.

Then, witness a very special display as the curtain rises to reveal each and every United States President, together for the very first time—followed by stirring speeches about the American Dream delivered by Presidents George Washington and Donald Trump.


The Hall of Presidents Details