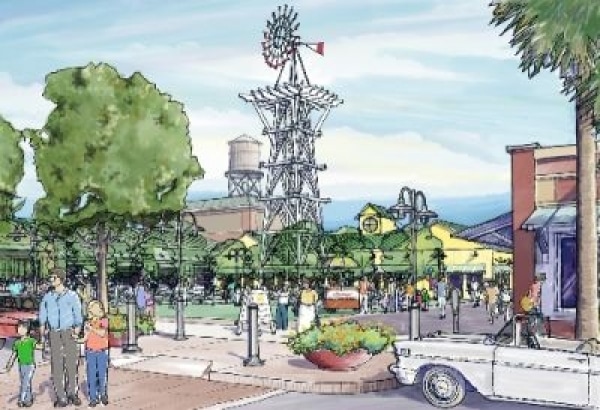 This week, Disney announced it will proceed with building a second retail shopping district near Walt Disney World. The new Flamingo Crossings shopping complex will bring more than 50 retail and restaurant spaces to the area (approx 250,000 sq ft of space). It is aimed at being a more cost-effective, budget-friendly shopping and dining alternative to the swanky Disney Springs complex.

Update 6/18/18: According to a number of reports, the Orlando Hotel Group LLC has filed construction permits for the (presumably) other four hotels: Homewood Suites, Home2 Suites, Fairfield Inn and Residence Inn.

Update 2/14/19: Our friends at WDWMagic are reporting that permits for the planned Flamingo Crossing  Hampton Inn and Suites have been filed, The new hotel will be located across from the two existing Mariott hotels.

Update 8/28/19: Permits for the Flamingo Crossings Town Center district have been filed. This are will include a Target, Walgreens and Speedway gas station. More details about Town Center are sure to come in the near future.

Update 12/13/19: It is being reported that a few of the more than 50 shops that will be included in the Flamingo Crossings retail hub include PDQ, Bento Asian Kitchen + Sushi, Five Guys, Ben & Jerry’s and Dunkin’.

Update 2/25/21: Flamingo Crossings is starting to take shape as a new Homewood Suites opened there recently.

Update 1/13/22: Disney has filed a permit for the construction of a new 20,000 foot AdventHelath emergency department facility at Flamingo Crossings.

The Flamingo Crossings complex, which was originally announced in 2007, will occupy roughly 45 acres between Flagler Ave and Flamingo Crossings Blvd, which is just off of Western Way, not very far from Disney’s Animal Kingdom. It is planned for development in three phases with construction of the first phase beginning in 2018.

There will be much more revealed about Flamingo Crossings as the project begins, so be sure to check back here soon for more info.