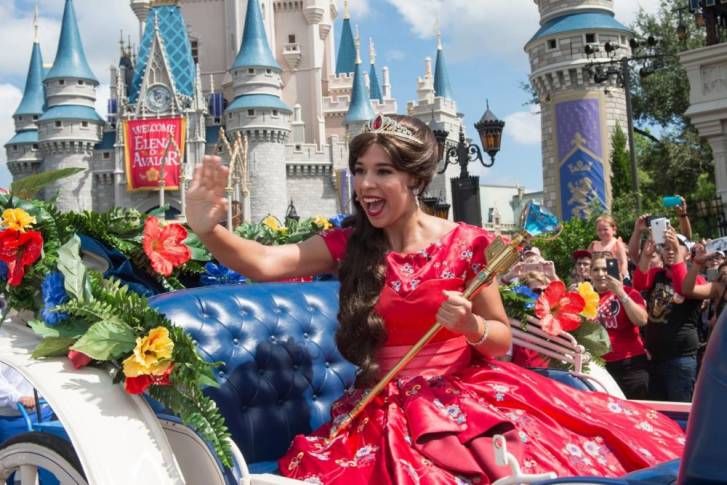 One of the most exciting, and sometimes challenging, parts of visiting a Disney Park is finding your favorite Disney character live and in the “flesh.” Some characters have stationary meet and greet spots; some host character meals; some float around the parks and some are in multiple spots (due to Disney magic, of course) at the same time. One of the most popular, and newest, Disney characters to set up residence in Disney World is Princess Elena of Avalor from the Disney Junior hit TV show.

Here is a rundown of all of my “Where to Find” Disney character posts.

Where can you find Princess Elena of Avalor at Disney World?

If you aren’t familiar with Princess Fairytale Hall, it is essentially a series of long hallways for a queue area with two themed rooms where visitors can meet, chat and take pictures with various princesses. It opened in 2013, replacing Snow White’s Scary Adventures. There have been a number of princesses that have called Princess Fairytale Hall since then most notably Elsa and Anna were there for a decent amount of time while the Frozen craze was going on.

Disney does offer Fastpass+ for the Elena of Avalor/Cinderella meet and greet, which is usually a wise selection since the wait can be long, at times.

I hope this helps. If you have other Disney World spots you have found Elena in, please leave a comment below and share your find!

Note: This post is part of a new series of Disney FAQ posts. Going forward, I will answer some of the most common questions I get in these types of posts so everyone will have the answer. If you have a Disney-related question, please shoot me a quick email here with your question.

Be the first to comment on "Where to Find: Princess Elena of Avalor at Disney World"