Here is everything you need to know about Walt Disney World’s Epcot’s Gran Fiesta Tour Starring The Three Caballeros ride including history, fun facts, photos and more. I hope you find this listing informative and helpful! 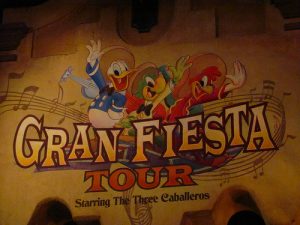 Take in the sights of Mexico and the antics of the 3 feathered amigos on this gentle boat ride through the Mexico Pavilion.

Donald’s disappeared, and it’s up to José Carioca and Panchito to find him.

Float along to live-action footage of the people and places of Mexico superimposed with animation inspired by the 1944 Disney film The Three Caballeros. And join Panchito, the Mexican charro rooster, and José Carioca, the Brazilian parrot, for hilarity and hijinks as they search for their wayward friend throughout this fun-filled ride for all ages. Will they find him in time for the big finale in Mexico City?

Donald could pop up anywhere, climbing Mayan pyramid steps in Chichen Itza, diving off a cliff in Acapulco or even disguised as a piñata! José Carioca and Panchito are in hot pursuit on their magical flying serape, treating you to vistas of ancient and modern Mexico on their merry chase.

Enjoy a lush and lively jaunt set to a rerecorded, rescored theme song and hand-drawn animation using the same color palettes and artistic elements as the original film. It’s time for a new generation of Guests to meet these lovably kooky compadres!

And there are three-dimensional delights as well: As you cruise down the Rio Grande, Audio-Animatronics dolls dance and frolic at the Festival of the Children while skeleton mariachis serenade you from above. (source)