Here is everything you need to know about the amazing Disney movie Mary Poppins Returns  including casting, reviews, fun facts and more. I hope you find this listing informative and helpful! 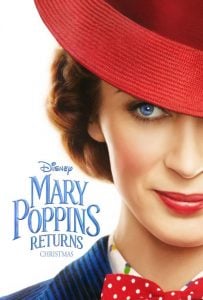 Mary Poppins Returns is set in 1930s London, which is the time period of the original novels by P.L. Travers. The story follows Michael (Ben Whishaw) and Jane Banks (Emily Mortimer), who are now grown up. Michael is living with his three children (Pixie Davies, Nathanael Saleh, and Joel Dawson) and housekeeper Ellen (Julie Walters), in the house on Cherry Tree Lane. After Michael has a personal loss, Mary Poppins (Emily Blunt) comes back into the lives of the Banks family. She is joined by a street lamplighter named Jack (Lin-Manuel Miranda), and an eccentric cousin named Topsy (Meryl Streep). Dick Van Dyke will also play a role in the film as Mr. Dawes Jr., the chairman of Fidelity Fiduciary Bank, which is now run by William Weatherall Wilkins (Colin Firth). (source)