With the release of Rogue One: A Star Wars Story in just a few months, it seems like a good time to do a little recap of everything we currently know about the movie.

Rogue One takes place between Episodes 3 and 4. You may remember this piece from the opening crawl of Episode 4 (A New Hope):

It is a period of civil war.
Rebel spaceships, striking
from a hidden base, have won
their first victory against
the evil Galactic Empire.

During the battle, Rebel
spies managed to steal secret
plans to the Empire’s
ultimate weapon, the DEATH
STAR, an armored space
station with enough power
to destroy an entire planet 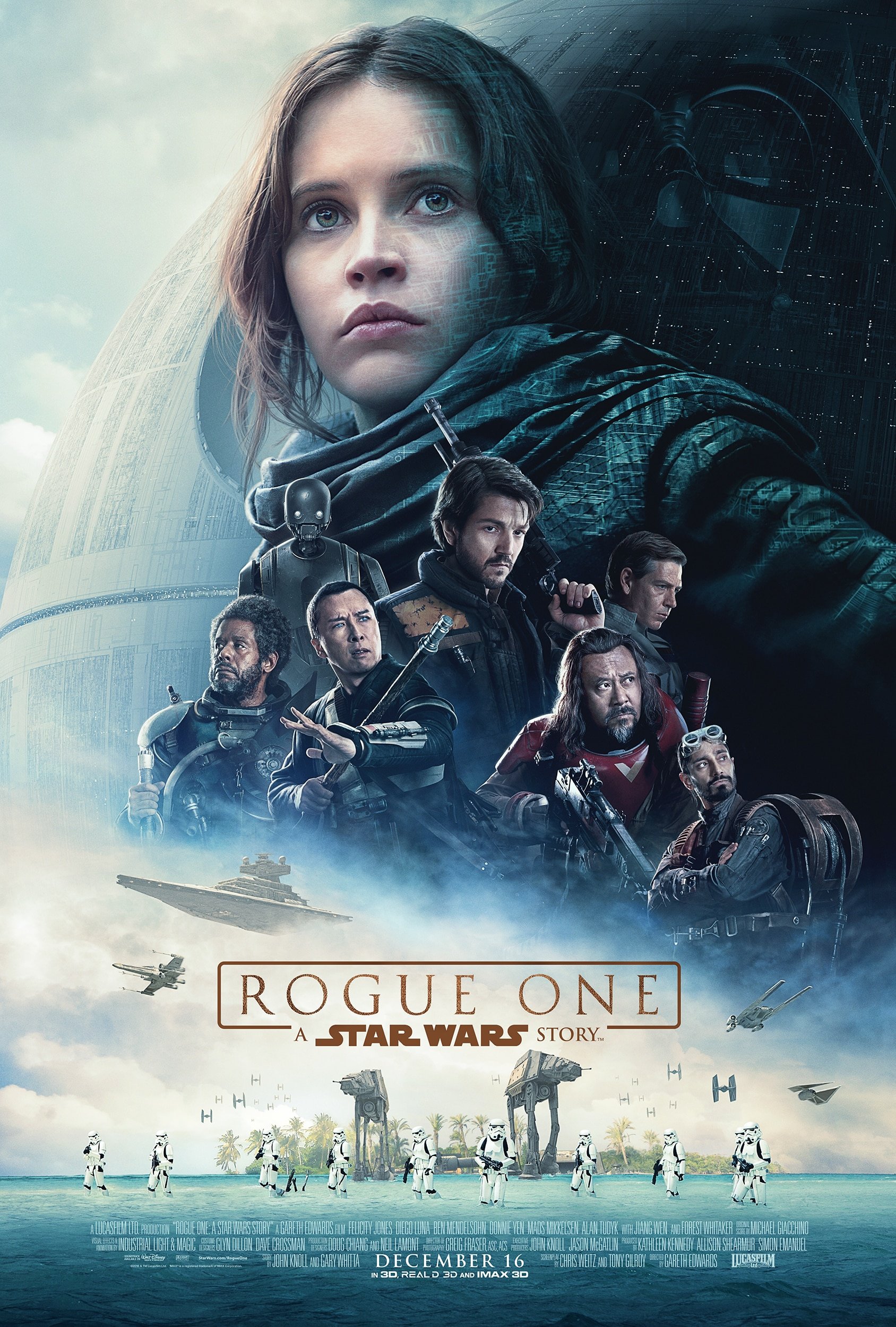 Well, that battle and the theft of the secret plans are what just about everyone expects the plot of Rogue One to focus on.

Rogue one is rumored to be 2 hours 13 minutes long.

Rogue One Cameos and Familiar Faces:

Most of the characters in Rogue One are new to the Star Wars universe, but we do know that Darth Vader will play a role in the movie as will an aged Saw Gerrera (Clone Wars), Bail Organa (Episodes 2 & 3, Clone Wars and Rebels) and Mon Mothma (Return of the Jedi). Warwick Davis, who played the Ewok Wicket in Return of the Jedi is also confirmed to be in Rogue One, although his exact role is unclear.

The movie takes place in Jedha (a snow-covered Jedi holy site), Scarif (a tropical planet where the Death Star is built) and, of course, in space.

Jyn Erso (Felicity Jones): Putting behind a checkered past by lending her skills to a greater cause, Jyn Erso is impetuous, defiant, and eager to bring the battle to the Empire. Used to operating alone, she finds higher purpose by taking on a desperate mission for the Rebel Alliance.

Captain Cassian Andor (Diego Luna): An accomplished Alliance Intelligence officer with combat field experience, Captain Cassian Andor commands respect from his Rebel troops with his ability to keep a cool head under fire and complete his missions with minimal resources.

Director Orson Krennic (Ben Mendelsohn): As director of Advanced Weapons Research for the Imperial military, Orson Krennic is obsessed with the completion of the long-delayed Death Star project. A cruel but brilliant man, Krennic has staked his reputation on the delivery of the functional battle station to the Emperor.

K-2SO (Alan Tuyk): A reprogrammed Imperial security droid now loyal to the Alliance, K-2SO is an alarming sight standing within a secret Rebel base. The pragmatic droid is an effective insertion agent, as he can blend in perfectly at Imperial installations and outposts.

Saw Gerrera (Forest Whitaker): A battered veteran of the Clone Wars as well as the ongoing rebellion against the Empire, Saw Gerrera leads a band of Rebel extremists. Saw has lost much in his decades of combat, but occasional flashes of the charismatic and caring man he once was shine through his calloused exterior. Gerrera is bunkered on the ancient world of Jedha, coordinating a prolonged insurgency against the Imperial occupation. Saw’s ailing health has not withered his resolve to fight.

Bodhi Rook (Riz Ahmed): A former Imperial pilot, Bodhi has strong piloting and technical skills that he will put to use for the Rebellion. Ever practical, but highly anxious, Bodhi must gather his courage to bring the battle to the Empire.

Chirrut Imwe (Donnie Yen): Deeply spiritual, Chirrut Îmwe believes all living things are connected through the Force. His sightless eyes do not prevent him from being a highly skilled warrior. Though he lacks Force abilities, this warrior monk has rigorously honed his body through intense physical and mental discipline.

Baze Malbus (Wen Jiang): The harsh reality of his Imperial-occupied home world has hardened Baze Malbus into a pragmatic soldier and a crack shot with his heavy repeater cannon. Baze has a bravado that provides a marked contrast to the spiritual centeredness of his best friend and moral compass, Chirrut Îmwe.

The good news is you don’t have to wait until December to get a glimpse of Rogue One. There have been a number of trailers and teasers released over the course of the past few months and here they are.

Rogue One: A Star Wars Story hits theaters in the US on December 16, 2016. Tickets officially went on sale November 28, 2016. It has also been announced the Rogue One will be released in China on January 6th, 2017.