Here is everything you need to know about the amazing Lucasfilm movie Rogue One: A Star Wars Story including casting, reviews, fun facts and more. I hope you find this listing informative and helpful! 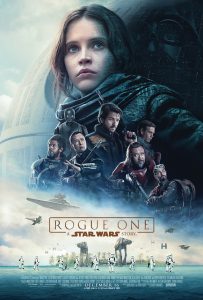 From Lucasfilm comes the first of the Star Wars standalone films, “Rogue One: A Star Wars Story,” an all-new epic adventure. In a time of conflict, a group of unlikely heroes band together on a mission to steal the plans to the Death Star, the Empire’s ultimate weapon of destruction. This key event in the Star Wars timeline brings together ordinary people who choose to do extraordinary things, and in doing so, become part of something greater than themselves.

Rogue One takes place between Episodes 3 and 4. You may remember this piece from the opening crawl of Episode 4 (A New Hope):

It is a period of civil war.
Rebel spaceships, striking
from a hidden base, have won
their first victory against
the evil Galactic Empire.

During the battle, Rebel
spies managed to steal secret
plans to the Empire’s
ultimate weapon, the DEATH
STAR, an armored space
station with enough power
to destroy an entire planet

Well, that battle and the theft of the secret plans are what just about everyone expects the plot of Rogue One to focus on.

The movie takes place in Jedha (a snow-covered Jedi holy site), Scarif (a tropical planet where the Death Star is built) and, of course, in space.