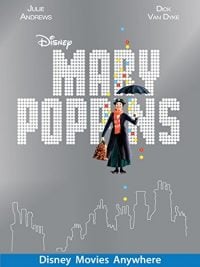 Winner of five Academy Awards®, including Best Actress (Julie Andrews), Best Song (“Chim Chim Cher-ee”) and Best Visual Effects, Mary Poppins is a movie experience your family will enjoy over and over again. “Practically Perfect In Every Way” Mary Poppins flies out of the windy London skies and into the home of two mischievous children. With the help of a carefree chimney sweep named Bert (Dick Van Dyke), the spirited nanny turns every chore into a game and every day into a “Jolly Holiday.” (source)