Here is everything you need to know about Walt Disney World’s Magic Kingdom’s Monsters Inc. Laugh Floor show including history, fun facts, photos and more. I hope you find this listing informative and helpful! 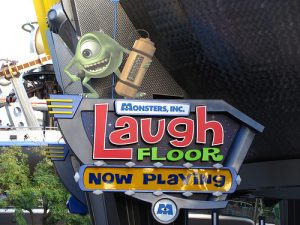 At Monsters Inc. Laugh Floor, giggle and guffaw to a gaggle of jokes during a live comedy show starring characters from Monsters, Inc. and Monsters University.

Discover the power of laughter from the original Monsters of Comedy during a hilarious interactive show. Continuing the zany adventures of Mike Wazowski and company from the hit Disney•Pixar animated films Monsters, Inc. and Monsters University, this fun-filled attraction invites you to be unafraid and laugh out loud.

The Opening Act
Step inside the only laugh factory in Monstropolis and make your way into a sprawling 400-seat comedy club. Before taking your seat, everybody’s favorite Monster of Ceremonies Mike Wazowski makes an appearance to explain just how the Monsters, Inc. Laugh Floor came to be.

The Punch Line
Once inside the Laugh Floor, sit back and prepare to chuckle till your sides split as the wisecracking Wazowski, skeptical manager Roz and some of the funniest monsters you’ve ever seen spring to life on a digital stage and do their very best to make you laugh.

Since the atmosphere in the comedy club is very improvisational, each show is a slightly different experience. And in true comedy-club style, the comics love to engage the audience. So don’t be surprised if, at some point, you become part of the show!

Meet the Monsters of Comedy
Although different shows may feature different comedians, some “hall of fame” monster comics that have performed at the Laugh Floor include: