Here is everything you need to know about Walt Disney World’s Hollywood Studios’ extinct The American Idol Experience Show including history, fun facts, photos and more. I hope you find this listing informative and helpful! 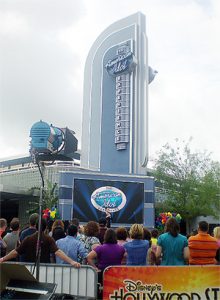 The American Idol Experience was a audience-participation show that was located in Disney’s Hollywood Studios in Walt Disney World. It was based on the hit television series American Idol. It was replaced in 2015 by the For the First Time in Forever: A Frozen Sing-Along show when that show was relocated to accommodate the new Star Wars Galaxy’s Edge park area.