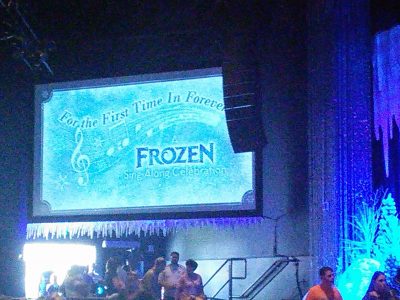 For the First Time in Forever A Frozen Sing-Along Celebration Show Description:

In For the First Time in Forever A Frozen Sing-Along Celebration, delight as Frozen springs to life in this lively retelling—packed with a flurry of stories, songs and sing-alongs.

Laugh and sing with an enchanting retelling of the kingdom’s tale that’s as humorous as it is heart-warming.

Relive the magic and wonder of Disney’s animated hit Frozen when 2 royal historians recount the windswept story of Anna, Elsa and the icy kingdom of Arendelle. Watch classic moments from the beloved movie play out on a large screen and sing along to some of the movie’s most popular songs, including “Let It Go.” On-screen lyrics—and appearances by Anna, Elsa and Kristoff—make it easy to join in the fun, and special surprises along the way only add to the enjoyment of this approximately 30-minute show.