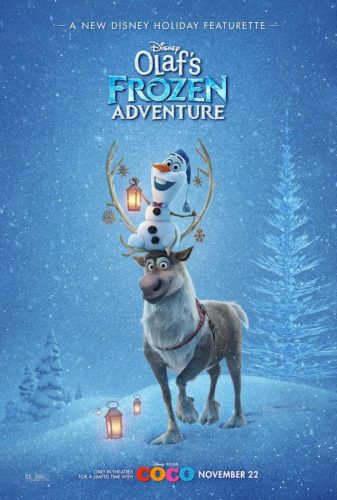 Viewers of Good Morning America this morning were treated to a nice surprise. On the Disney-owned ABC morning show, we got our first look at Olaf’s Frozen Adventure, the upcoming new 21-minute Frozen featurette.

According to Disney, Olaf’s Frozen Adventure “welcomes the original cast and characters back to the big screen, including Olaf (voice of Josh Gad), who is on a mission to harness the best holiday traditions for Anna (voice of Kristen Bell), Elsa (voice of Idina Menzel) and Kristoff (voice of Jonathan Groff). Directed by Emmy®-winning filmmakers Kevin Deters and Stevie Wermers-Skelton (“Prep & Landing”), produced by Oscar® winner Roy Conli (“Big Hero 6”), with original songs by Elyssa Samsel and Kate Anderson (“Between the Lines”).”

Olaf’s Frozen Adventure will run before the Disney/Pixar movie Coco, which is slated to premiere on November 22, 2017. Here is our first look at the featurette: