Here is everything you need to know about Walt Disney World’s Magic Kingdom’s extinct Delta Dreamflight attraction including history, fun facts, photos and more. I hope you find this listing informative and helpful! 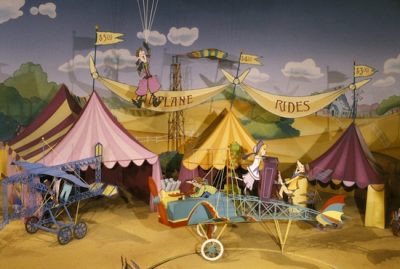 Delta Dreamflight was an omnimover ride in Walt Disney World’s Tomorrowland from 1989-1996. It featured a number of audio animatronics and visuals that gave guests the feeling as though they were exploring the world on a Delta airplane.

This ride replaced the similar ride If You Could Fly when the ride sponsorship switched from Eastern Airlines to Delta. It was eventually changed to Dreamflight and then Take Flight after the Delta sponsorship ended and in 1998 closed for good. The space is now used for Buzz Lightyear’s Space Ranger Spin.