Soarin’ Around the World (Disneyland) 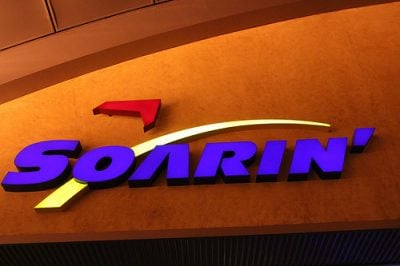 Soarin’ Around the World Description:

Fly through the sky like never before as you hang glide over international landmarks and beloved landscapes. It’s Soarin’ Around the World, an epic re-imagining of the classic Disney California Adventure attraction!

Now Boarding…
Deep in the Golden State, surrounded by the splendor of Mother Nature, Grizzly Peak Airfield awaits. Amid this community of majestic mountains, lush pine forests and other scenic wonders, you’re invited to head within a massive hangar—home to the California Aviators.

After exploring the storied history of aircrafts from the Wings of Fame and paying tribute to icons of aviation from the Legends of Flight, you’ll receive a quick briefing and then make your way to a large theater. Inside, you’ll quickly discover the latest in open-air flight technology!

As the lights dim, get ready for an experience like no other as you gracefully ascend 40 feet high and take your position in front of an 80-foot projection dome for a simulated flight around the world.

An Exhilarating and Epic Voyage
The globetrotting kicks off in the Swiss Alps, as clouds clear the way and unveil a towering sight familiar to longtime Disneyland fans. But the adventure doesn’t end there… it’s just beginning! Throughout your tour, you’ll hop past The Great Pyramids of Egypt, sail across the spectacular Sydney Harbour, cruise near Mount Kilimanjaro and explore many other picturesque locales.

This is your chance to feel like you’re flying on a hang-gliding ride along the horizon—all set to an iconic musical score—before coming in for a climactic and unforgettable landing!

No matter your age, you’ll be unable to resist smiling on this aerial expedition, one filled with excitement, wonder and awe-inspiring vistas.